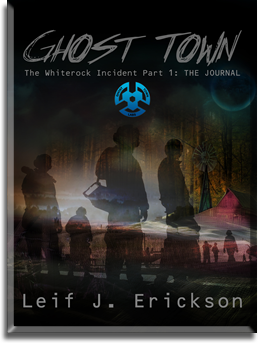 Continuing with the ‘Ghost Town’ themed blogs, which I’m still taking questions for, today I’m going to write about the main character in the first book, Ethan Drew. The first novel is seen through the eyes of Ethan, narrated from his journal. Ethan has no idea what he’s in for when he first arrives in Whiterock nor does he put the pieces together very quickly. The mystery surrounding the area engulfs him to the point that Ethan’s fate is intertwined with that of Whiterock.

Ethan’s an FBI agent who gets sent out under cover to investigate the disappearances of six people from the small town of Whiterock. Coming from an agrarian background himself, Ethan poses as a farmhand for Doctor Victor Tesla while he investigates the area. It doesn’t take Ethan every long to fall in love not only with the nature and beauty, the simplistic life of the area, but to also fall in love with Victor’s eldest daughter Michelle.

From the moment he first sets eyes on Michelle in the barn, Ethan knows that she’s something special, she’s a different sort of woman, and their relationship moves quickly, Michelle moving it along at record speed, explaining that for a single woman in a farming community, it’s difficult to find a good man that doesn’t spend all his time in the bottom of a bottle.

Ethan, knowing that he cannot live a double life while spending so much time with Michelle, being so close to her, confesses who he really is and what his reason is for being in Whiterock. To Ethan, this started out as being a case, nothing more and nothing less, but there’s something more to it, Whiterock seems to be pulling him into a fate that he cannot escape. Ethan doesn’t know what will happen once the case is over, all he can tell Michelle is that fate will have to play its hand. Michelle tells Ethan that she will do everything in her power to get Ethan to quit the FBI and stay on the farm with her once this case is over.

From the moments Ethan and Michelle start their relationship, its full speed ahead for the pair as the world around them begins to crumble. Ethan keeps getting more confounded by the seemingly stranger and stranger clues that appear before them, the rumors of ghosts, and the events that take place. As hard as he tries, Ethan cannot catch a break in this case.

As events get stranger, Ethan digs deeper into the past of Whiterock, deeper into the history of the forest, as the further back he goes, the stranger it gets. He uncovers secrets that could destroy the legacy of the sleepy little hamlet and changes his perception about all the people who live there.

As more people start to go missing, Ethan ramps up his efforts to no avail, bringing in other FBI agents to help and slyly questioning more people of the community without giving away his true identity. On the final night, when hell is unleased upon the earth, when everything comes together and Whiterock, and the world, are forever changed, Ethan understands that what he missed before. On that night, Ethan’s only concerns are for Michelle and her younger sister Madison. Ethan comes to know what evil is.

To find out more about Ethan, what he discovered and what he will do to save the world and his relationship with Michelle, head over to Leifericksonwriting.com and buy your copy of ‘Ghost Town’ today. Check out my other blogs on the ‘Ghost Town’ series and stay up to date on all my writing projects. Thank you.