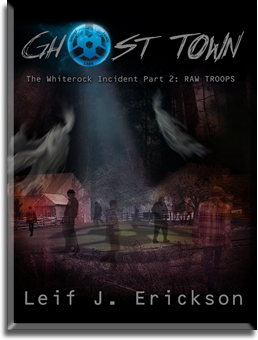 Just days after Ethan Drew left his journal on the altar of New Church in the forests around Whiterock South Dakota, an elite team of military troops known as Remote Alert Warriors or RAW Troops, are brought in with orders to contain the Whiterock Incident, destroy any threats, discover the full extent of Ghost Town Lab’s work, and bring Doctor Victor Tesla to justice. An easy mission except the village and lands of Whiterock are crawling with ghosts.

The teams are positioned strategically around Whiterock and the surrounding lands while they wait for the signal to enter the underground laboratory of Doctor Victor Tesla and Ghost Town Labs. Each team has a unique mission, one guarding the entrance to the Old Town Road, another in the town of Whiterock itself, the third, men hiking through the forest, trying to get to Blackstone Hollow, the fourth, a pair stationed in the spire of New Church, the fifth, a group boating down the rivers of the forest, and the final group stationed in the Tesla Farmyard.

As the teams take their positions they quickly discover that even with all their training, they were not prepared for what they were going to see around Whiterock. The lead commander of the RAW Troops didn’t inform the troops about what they were going to fight in Whiterock which causes the troops to be at a severe disadvantage. The RAW Troops discover that not all is as it seems, not just in Whiterock but in the order of their troops as well when members of Ghost Town Labs are discovered among them.

With many troops killed and the remaining undersupplied and uninformed, the teams rendezvous at the Tesla Farmyard waiting for the order to enter the laboratory. As they wait they exchange stories of the horrors that they saw around the area. When the communication comes that backup will not be sent in, the RAW Troops are left to fend for themselves as they prepare to enter the lab. Can the troops find Doctor Victor Tesla and stop him before he unleashes his madness upon the world or will the RAW Troops simple be the next in a long line of victims of Ghost Town Labs?